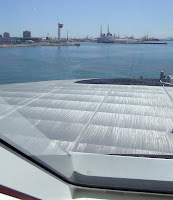 Alarm at 5, bunny count of three as I emerged for a fox's breakfast. The real breakfast was tins of breakfast compote and prunes with lashings of yoghurt.
Departure at 6.15 after a smart hookup (note above on benefits of weight reduction), but something is squeaking. The Norman Arrow is a new (to me) boxy design of ferry, a multiple- storey car park with a barn and cafe on top, nevertheless, comfortable and efficient. 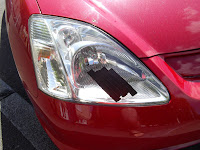 Our extensive and effective money-saving wheezes came to the fore with black masking tape borrowed from another chap in the ferry queue (£6.99 on headlight deflectors) [photo]; GB magnetic sticker found in the glove compartment (£3.49); cheese sarnies (£7) flask of coffee (£8.60). You can't spend it twice (unless you spend it on an income producing asset, which consumables are not). Also in the queue was a small vintage Saab convention.
The journey from Le Havre to Chateau de Lez-Eaux was relatively pleasant and stress-free with the old satnav, but the poor old thing became rather perturbed towards the end when we followed Caravan Club directions rather than Tom’s. We were pleased to learn that because Gerald the caravan is so small we were only charged Class 1 tolls – around €3.10, €1 and €5.70 all the way. 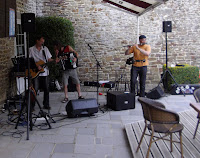 We thought we knew the first campsite from earlier years with Gerald the VW, but I think we were mistaken. They had a band playing the first night we were there, Group Foumagnac, "a mixture of popular and lively Celtic and Irish music": their setup and practice a few hundred yards away sounded just like being at Cambridge Folk and their performance was better than many bands we have seen at Cambridge. 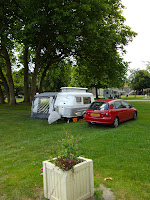 The Bromptons have been taken out on a first mission and are relatively successful: just two problems – me getting used to the gears and, more importantly on the red one, picked up yesterday, seems to have been reassembled with the front fork in reverse, so it folds, but unconventionally.
It was a pleasure to reacquaint myself with pâté de canard for lunch and it will be chicken curry tonight.
I made the mistake of giving away one of our 907 Gaz bottles when we sold the camper, not realising that they cost £60 to replace – even on eBay they are remarkably expensive. The going rate in France is more like £45, so we’ll invest in another. Then:
·      We are very unlikely to run out of gas; and
·      I can run the Cadac and a burner simultaneously.
Posted by NickB at 09:45