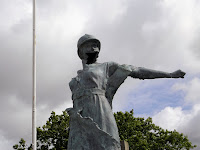 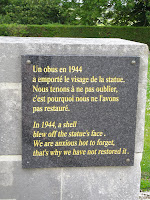 Saw the Bayeux tapestry and found a market on the way at Trévières. A modest market where we bought veg and pêches. The nearby church proudly displays a statue with war damage.

We failed to find the hidden church or, indeed, any supermarches on the way and so will try again later.

The tapestry is a remarkable thing, perhaps the first portable cartoon as cave paintings are perforce static displays. Photographs are not allowed and so these images, showing the comet and Harold getting one in the eye,  are sourced in Google. We entertained ourselves (and probably annoyed our fellow observers) with our witty and trenchant interpretations of the images and inscriptions. In the gift shop we bought cartes postales for the grand-meres (which, unusually for us, we managed to both write and send while still on holiday), my usual commemorative fridge magnet and I secretly sneaked in a DVD of the tapestry so that we can relive the pleasure tonight.

Bayeux cathedral is large but visually unexciting.
We found the supermarches and the way to the church but the latter, in Sommervieu, is not accessible as it is owned by some Fraternal Ordre de Christ.

One more night (with butter chicken) and 8 o’c alarm clock with an intended 10:45 departure. A dry awning would be good, but looking increasingly unlikely.
The principle: we have concluded that caravan camping is superior to camper camping because of the added freedom the car provides.
The details: the bed is significantly larger, far more comfortable, and much easier to put up. The water supply (cold in both) is usable in the puck. We haven’t used the cooker in either because curries tend to linger and, in any case, I would prefer to cook outdoors. The external table is also a boon.
Posted by NickB at 09:41